Posted on December 9, 2016 by susanhockey

This is the sixth blog post on our round the world trip August – November 2016. It covers Adelaide, South Australia and Kangaroo Island

We had booked one of the Franklin Central Apartments in the centre of Adelaide which was an easy walk to shops and restaurants. We found Adelaide to be a pleasant well-laid out place. The central rectangular area is surrounded entirely by parkland which they call terraces. The covered market was amazing, even better than the one I remembered in Halifax as a child. All kinds of different foods were on sale and we had a nice lasagne lunch.

We took the tram out to Glenelg by the sea which seemed to me to be a bit like Santa Monica in California. Some people were in the sea and there were lots of restaurants. After the rich food on the train we were glad to stay in for a TV dinner on our first night there. 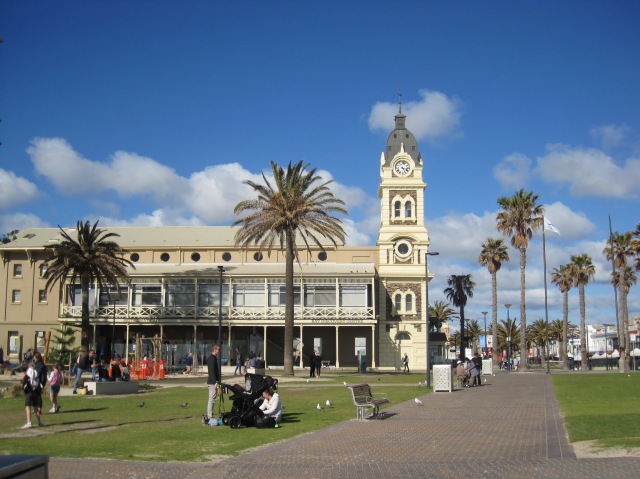 Next day it was rainy and windy and barely fit to go out. At 3.50pm the power went off and we were in dark for 5 hours. At least we were only on the 4th floor here. Martin walked down to street level and went out twice to try to find out what was happening. All the power was out in central Adelaide and policemen were directing traffic at all the intersections.

We had bread, cheese and ham for dinner by torchlight. The power came back on at 8.50. The storm in South Australia was the big news on the TV. Something had caused the power for the whole state to trip and the politicians were already arguing about whether South Australia relied too heavily on wind power which could not cope in a big storm.

We had booked the ferry to Kangaroo Island for the next day (a Thursday) but we had an e-mail from Sealink ferry company to say that all ferries were cancelled for that day and another one from Katya the owner of the Waves and Wildlife cottage we had booked with the same information.

We phoned the ferry company and the earliest they could rebook us for was 7am (an extra journey) on Saturday which would give us 1.5 days on Kangaroo Island. We decided to go and Katya kept the booking for us. Sealink also booked us a room for Friday near the ferry terminal at Cape Jervis which is 100km south of Adelaide.

We picked up the 4WD we had already booked for this day. We couldn’t stay another night at Franklin Central and decided to go to a motel at Glenelg. Needing to buy a map and some food, we found a huge new Westfield Mall (with plenty of cheese shops) just south of Adelaide then drove out to Brighton where the sea was very very stormy.

The Ensenada Motor Inn at Glenelg was very comfortable but the weather got worse again. We went out to get some dinner but were almost blown over and got only as far as a fish and chip shop round the corner.

Getting to the ferry

There was time to see a bit more of South Australia on our way to Cape Jervis. After another visit to the mall and the new Aldi store in it, we drove through undulating farmland and wineries to Victoria Harbor (yes they spell it this way) on the south coast which seemed like a nice town. It was still quite windy and the horse-drawn tram across the causeway to Granite Island wasn’t running because of slippery ground.

The accommodation at Cape Jervis turned out to be a mixture of things but we were in two-room suite in a small house adjacent to the main building. The front door opened into the bedroom. There was a very welcome electric blanket.

We were lucky with the weather the next day. I was very glad that it had got better as the Spirit of Kangaroo Island was a rather elderly catamaran, much smaller than the cross-channel ferries.

Kangaroo Island is the third largest island in Australia. It lies west off the tip of South Australia and is 150km long from east to west but much narrower across. Waves and Wildlife is at Stokes Bay in the middle of the north coast.

We were off the ferry by 7.50am and took the main road across the island. Soon we came to a flood and had to turn back. The map showed a gravel road near the north coast – thank goodness we had a 4WD – and we were at our cottage just after 10. We phoned the owners to say that we had arrived and had just finished eating some of the eggs they left us when Paul turned up and drew a good route on our map for a day trip round the island.

After a brief stop at the beach at Stokes Bay – you have to go through a rock tunnel to get there – we continued on the north coast road and detoured to Western River beach, a lovely spot with sandy beaches by a river estuary. On the way an echidna crossed the road in front of us. The sun had come out by then and some of the scenery did look very much like Dorset.

Flinders Chase National Park occupies the south-west end of the island. It has an excellent visitor centre just like the American ones. Some of the trails were closed because of flooding, but we did do a short walk in the hope of seeing some koalas. Martin walked a bit further than I did and spotted two. You have to look carefully as they are usually high up in the trees nestled in a fork between two branches.

We drove to the end of the island to see Admirals Arch and then the Remarkables, a series of big odd-shaped rocks balanced on a dome-like cliff top. There were a lot of Japanese tourists, probably on a day trip from Adelaide. 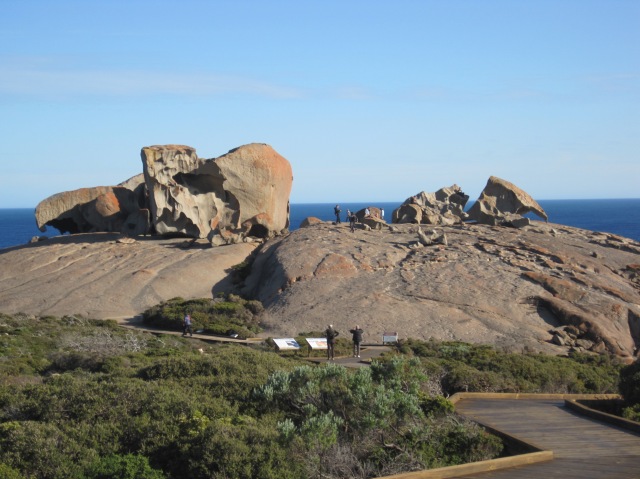 On the way back to the cottage we had a very brief stop at Vivonne Beach, which is supposed to be the best one on the island. We had to buy some petrol from an ancient pump at a very old-fashioned general store.

It was just beginning to get dark when we got back to find the other guests out photographing a lot of kangaroos on the lawn in front of the cottages. I counted at least 60. Most were feeding but two were fighting. I only saw one joey in the pouch. The ones on Kangaroo Island are a bit smaller than those on the mainland but they are a lovely chocolate brown colour.

In the evening we watched a DVD about a mob of kangaroos in which a little one died because its mother didn’t bother with it. Apparently this is not uncommon.

Paul phoned and asked if we would like to see some animals next morning. Of course, and so we agree to meet him at his wildlife sanctuary at 9.30. Five other people were there.

Paul disappeared with a ladder and returned carrying a koala bear which we all got to cuddle. She was surprisingly heavy – they weigh 8-10 kilos.

Then it was a lovely white cockatoo with a yellow comb. It was 10 years old and had been rescued from a residential area in Adelaide because it was swearing (f-word) loudly all the time and annoying the neighbours. Paul said it had finally stopped when it no longer heard any swearing.

We were then shown some reptiles whose name I didn’t catch and finally Paul appeared with a 3m green-brown olive python draped round him. We declined to hold the snake but Martin said it looked like the one which had spooked him at El Questro. It is not poisonous.

There was just time for a short visit to the Seal Bay Conservation Park on the south coast. They were actually sea lions but we didn’t see too many.

The return ferry was much busier and Martin had to reverse the car on. A full 4-deck sheep bus was on board. Quite a smell. 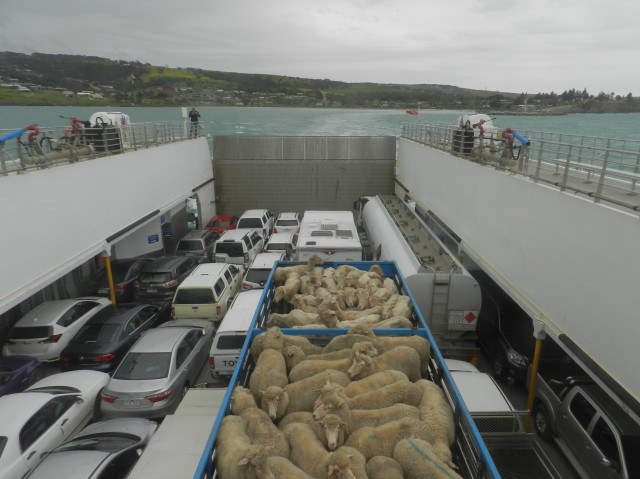 It was getting windier and started to rain again. By the time we got to the Coastview Motor Hotel at Port Noarlunga just south of Adelaide, another storm had come up. There was quite a view of the rough sea from our room which was one of the better ones we stayed in. It was too windy again to drive far for dinner but nearby we found a take-away that did roast chicken meals. Excellent.

Top of the war memorial, Glenelg

He didn’t mind the storm too much

Yes they do eat cheese in Australia

We were safe from the storm here, Glenelg

Our cottage at Waves and Wildlife

View from our cottage, Kangaroo Island

Sunset from our cottage at Waves and Widlife

The cockatoo was hungry, Paul’s Place

Close-up. Can anyone identify him?

Some kind of lizard?

No we didn’t handle the snake

Not many sea lions at Seal Bay Conservation Park