This is the tenth blog post on our round the world trip August – November 2016. It covers our stay in American Samoa.

The plane to yesterday

We were at the small airport at Apia in plenty of time for the plane to yesterday. Polynesian Airlines fly between Samoa and Pago Pago on American Samoa. For a long time they were unable to give us a timetable. As we had a flight out of Pago Pago on the Friday night, we were rather beginning to wonder how we would be able to get there from Samoa. At last they responded with a time on the Wednesday and we booked immediately. Thankfully we were able to avoid enduring 7 hours on the Lady Naomi, sister ship to the Lady Samoa III.

The immigration exit officer was one lady sitting at an old desk and our boarding passes were handwritten. The plane was a propeller Twin Otter and there were only 7 passengers in the 17-seater. No questions were raised about our amount of luggage which was definitely in excess of their limit. There was no flight attendant and we could see into the cockpit of the plane. The trip took only 30 minutes. We left at 12.30 on Wednesday and arrived at 12.00 on Tuesday after crossing the International Date Line. 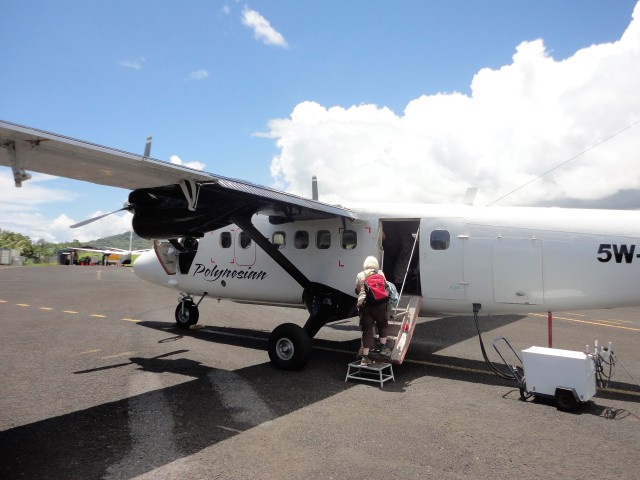 Boarding the plane to yesterday

American Samoa has a rather peculiar status of being an unincorporated territory of the United States. The main island Tutuila with the capital Pago Pago has a huge natural harbour which is the main reason why the Americans hold on to it. It was getting close to the US election day but the American Samoans did not have a vote for the president. However many other offices were up for election and posters were plastered everywhere. Conveniently they use US dollars.

A taxi took us from the airport into the town of Pago Pago. The journey was quite slow by the sea round the edge of some mountains. It seemed more industrial than Samoa and there was more traffic. We had booked at room at the Sadie Thompson Inn. There are two Sadies hotels in Pago Pago and the other one, Sadies by the Sea, was fully booked, we later found mostly with various US government workers.

The Sadie Thompson Inn looked like an old wooden building on the outside, but our room was just like any American motel room. We were right by the sea but on a main road with a constant stream of smallish trucks. For lunch on our first day we resigned ourselves to the meal of last resort (McDonalds) which was just nearby – the first time on this trip. Most of the other customers were large Samoans.

We were very close to the bus station and the buses were just like those on Samoa.

Our guidebook was not very complimentary about the food in the hotel but we decided to try it for dinner as there didn’t seem to be anywhere else nearby. We had a good meal in an almost deserted restaurant. The lady on the reception desk was very helpful and chatted to us quite a bit. She was from Tonga. We began to wonder if we had made a mistake with the location of this hotel. How could we see the rest of the island?

The next day we decided to try to rent a car. Avis quoted a horrendous price on the Internet. We asked the receptionist who told us that the Sadies hotels have a 4WD car for guests to rent and booked it for us for the next two days. She also booked the umu that evening at Tisa’s Barefoot Bar, which is an American Samoan institution, on the beach about 15 minutes drive from the hotel, and organized a taxi to take us there.

Cheered up, we looked round the local market and then found a cafe which did good sandwiches. There was a small museum nearby with some nice carvings and paintings. There was nobody else there at all – we didn’t even see any staff. 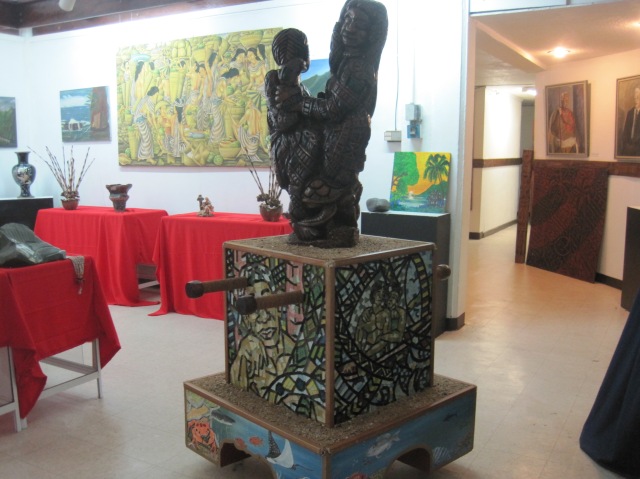 On the way to Tisa’s we passed the main industry in Pago Pago. There are two huge canneries for tuna. The trucks passing the hotel were taking the cans to the container dock which was just beyond the museum.

The umu cooking was very similar to that at Va-i-Moana. We were served breadfruit, prawns, octopus, chicken and pork on a banana leaf. Breadfruit is not my favourite food but the meat was good. 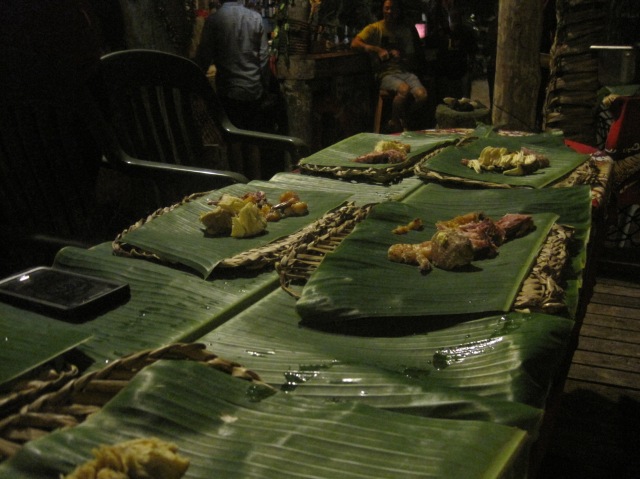 We were seated at a long table and enjoyed very good company for the evening. Three guys from Connecticut were doing some statistical analysis for the US government. The subject of Trump inevitably came up and one of them said he was going to get into his car and drive to Toronto on 9 November if Trump won. I wonder if he did. Our other companions were New Zealanders who were fishing for tuna to take to the cannery. Their boss was with them – he had travelled a lot and goes to American Samoa about once a month to oversee the transfer of the tuna. We also chatted to some nice Samoan ladies.

The taxi came back for us as promised. We were still a bit hungry when we got back to the hotel and so had a large helping of American apple pie and ice cream.

On the Thursday we really did begin to see some of the island. We had to collect the car from the other Sadies hotel about a mile away. It had done 60000 miles (surely not on a small island) and a warning light would not go off, but we decided to take it anyway.

It was a toss-up where to go first but we settled on the west side of the island. The guidebook recommended visiting the new Roman Catholic Holy Family Cathedral near the airport. Finding it was rather frustrating and we first drove round another large religious complex which I think was a kind of seminary. Eventually, after asking around, we found the cathedral. It was well worth the effort. It is a huge white building with a dome in the middle. The bell tower is a separate structure, tall, thin and spindly. 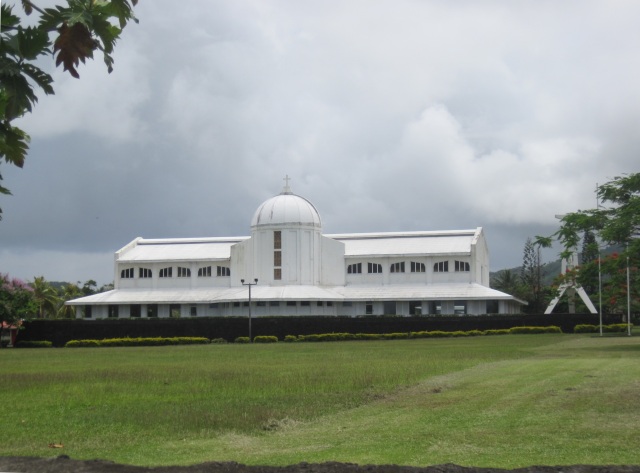 Inside there were some lovely stained glass windows depicting Samoans, and nice clean wooden seats and a wooden Christ. A painting, called The Holy Family, depicts a Samoan family on the beach at the village of Amanave which we later visited.

Painting, the Holy Family, inside the Catholic Cathedral, American Samoa

The caretaker came out to talk to us – I don’t think he sees many tourists.

Nearby we finally found Tia Seu Lupa, one of many prehistoric star or earthen mounds in Samoa. It was very overgrown but was not unlike the heiau temples in Hawaii.

After a sandwich picnic on a beach with lava rocks, we finally left the built up area and it began to look more like the other Samoa. There were some similar houses, although more modern ones as well, and large churches. We went as far as we could, to the last village Fagamalo. There were spectacular views as the road climbed over rugged mountains with lush rainforest vegetation. Palm trees were perched on rocks out to sea. All the villages were by sandy beaches with coconut palms and breadfruit trees.

On our last day we tackled the east side of the island where there is a national park, part of the US parks service. We had run out of food and had to resort to McDonalds again for breakfast. After that we drove up a steep road to a viewpoint over the harbour then into the national park.

There was more spectacular scenery as we went down to the sea on the other side of the mountains where there were more small villages on idyllic beaches. 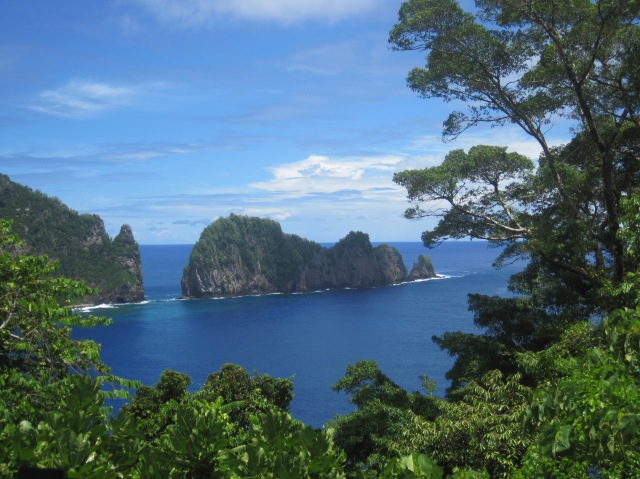 The signage etc was just like in the parks on the US mainland. Martin walked up one of the hiking trails to a saddle, but only attempted a little of the ladders and ropes going down on the other side – he would have had to come back up anyway. 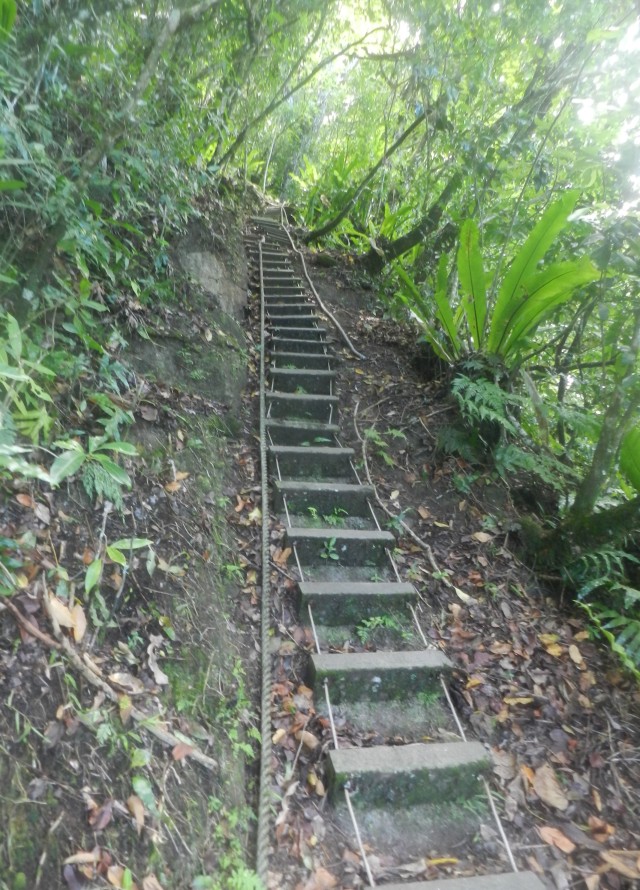 On the way back we saw a flying fox actually flying – they normally sleep during the day.

We still had a few hours left and so back down at sea level we went to Tisa’s in the hope of getting a smoothie, but found that they only serve alcohol and fizzy drinks. We got into conversation with two young Americans there who had a drone. They had been filming one of the other American Samoan islands Ta’u which is now virtually dependent on solar power set up by one of Elon Musk’s companies. One of the two worked for Tesla.

We drove further round the east coast and were amused to see an election poster on a rock out to sea.

Our flight was not until midnight, but it was raining a bit in the late afternoon. We took the car back to Sadies By the Sea and had a leisurely dinner there where we met the tuna fishing boss again. In the hotel shuttle to the airport we finally met some other real tourists on American Samoa. They were a group of American national park enthusiasts some of whom had seen almost all the sites managed by the National Parks Service.

We really only planned to go to American Samoa as a way to getting to Hawaii and the rest of the US. But once we had the car it became an interesting place to visit. Away from Pago Pago and the bigger shopping area near the airport, it was much more like the other Samoa. Pago Pago was not as American as we had expected but, with the canneries and McDonalds and malls, parts of it were not very attractive. Three days was probably enough.

Boarding the plane to yesterday

Inside the Twin Otter plane

Leaving Samoa, from the plane

First sight of American Samoa, from the plane

Outside the museum, Pago Pago

Inside the Catholic Cathedral, American Samoa

Painting, the Holy Family, inside the Catholic Cathedral, American Samoa

We gave up on driving this road, American Samoa