Finally, finally we were back at our house in Florida in January 2018 after our enforced stay at home in 2017. But it was 31F (yes the Americans still use Fahrenheit) at 8.30pm when we arrived at the house after our flight to Orlando from Gatwick. Fortunately it soon warmed up with daytime temperatures in the 80s for all of February when we had every meal outside at home. 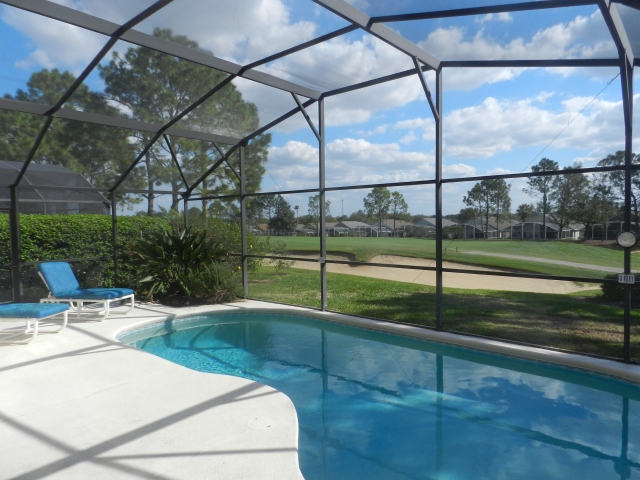 The house was fine thanks to our great property managers. Martin spent a lot of time on the garden which had been damaged by frost – a rare event in central Florida. We feared we had lost our variegated hibiscus but it and most other apparent casualties recovered rapidly. Watering is easy when all you have to do is turn on the sprinklers.

There weren’t many signs of hurricane damage in our area but when we went in search of a papaya plant at our favourite plant nursery in Kissimmee, we found few plants there and were told that they had thrown away much of their stock after it was flooded in the aftermath of Irma. They had no papaya plants, but we found some at the nearby Home Depot and invested $40. It was doing very well when we left as was the avocado I planted from a stone 3 years ago whch was now over 7 ft tall. 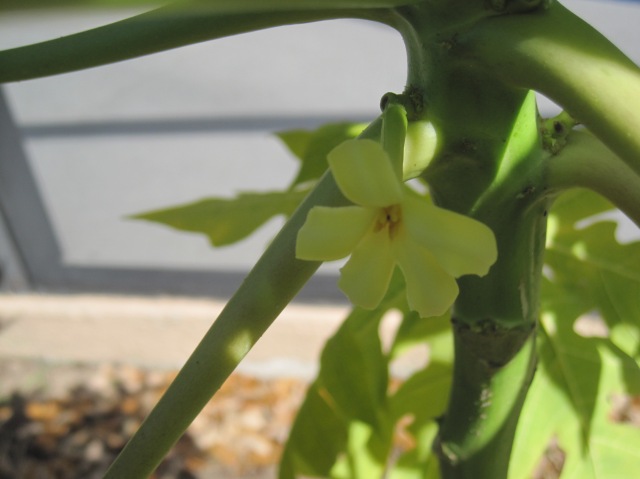 Our house is in the north-east of Polk County close to Orlando, but most of the county is cattle country – yes there are a lot of cattle in Florida but they are always spread out, not grouped together in bunches like ours. There are also plenty of ospreys in Florida. I just didn’t have my camera out when we drove under a gantry with an osprey nest on it on the Polk Parkway. We were on our way to Bartow, a small town which is the administrative centre of Polk County. Once you get past the line of drive-in fast food places, there’s a nice town centre with real old-style courthouse occupying a whole block. It houses our destination, the Polk County Historical Museum. As always in the USA, there were excellent displays and a helpful volunteer acting as a steward.

Afterwards we went to tiny Homeland where there is a heritage park with old pioneer Florida houses. Sadly the buildings were closed, but we could get inside the park to walk round. The Methodist Church built in 1878 was the most elegant. 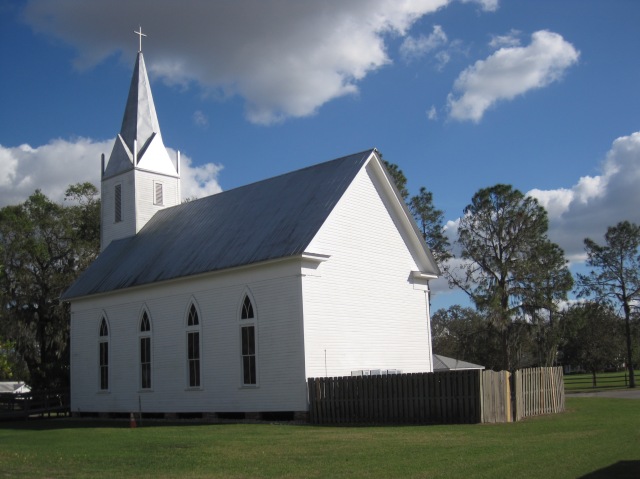 Another day we went to the Tampa Bay History Center, where there were some excellent displays of the history of the area. In almost all the local museums we have visited in the US there has been quite an emphasis on the peoples who lived there before the Europeans came. The displays here were absolutely excellent and we had trouble dragging ourselves away from the bookstore where the credit card took quite a hit.

We couldn’t go to the west coast without visiting our favourite place Honeymoon Island, a state park just north of Clearwater. There you can walk the Osprey Trail – there were a good few at home. We had also seen an armadillo there before, but this time there were two, pottering about by the trail. 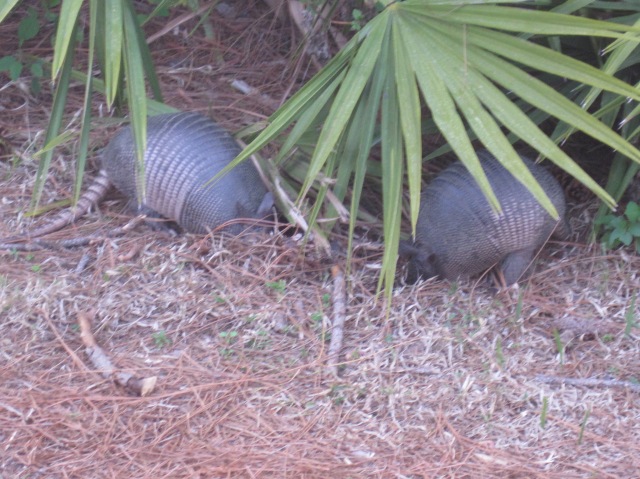 A pair of armadillos at Honeymoon Island

Honeymoon Island is a great place for the sunset over the Gulf. The day was finished with a Greek meal in Mykonos, our favourite restaurant in Tarpon Springs.

When our friend Nancy came to stay for a few days our first trip out was to see the Frank Lloyd Wright architecture at Florida Southern College in Lakeland. This was our second visit to the college as we had also been there one evening earlier in our stay to see what turned out to be a very professional student production of South Pacific.

Frank Lloyd Wright was persuaded by the then President of the College Dr Ludd Spivey to design almost the whole campus beginning in 1938. It took nearly 20 years and it is the largest collection of Lloyd Wright architecture built for one client. We did the 2-hour walking tour which ended up as 3 hours with an enormous amount of detail from a rather large young man who had been studying Lloyd Wright for years. Among the donors whose names were commemorated in stone was one Oliver Cashdollar.

A castle in Florida

A castle was next on our agenda. A castle in Florida?? We had read about Solomon’s Castle in a book on the backroads of Florida. This was indeed in the middle of nowhere, about 1 hour 45 minutes south-west from our house. We expected to be the only visitors, but when we eventually got there, it was crowded with people, many of whom were also attending something called Pioneer Park Days in the nearby town of Zolfo Springs. Lunch was served in a wooden pirate boat, stuck in the moat. It looked rather like the tourist pirate boats we had seen in Marmaris in Turkey in 2016.

The walls of the castle are aluminium with stained glass windows embedded in them. It was built by an eccentric called Harold Solomon who filled it with an amazing collection of objects which he made himself out of anything he could scavenge. In the surrounds we walked past a mock façade of a mosque and a model of an Easter Island statue. Solomon also collected vintage cars which are housed in another building together with car models which he also built.

One of Solomon’s creations inside his castle

We spent the first week in March on a cruise in the Caribbean, which you can read about here.

Miami Beach (or not) and the Tamiami Trail

There were some guests in our house when the cruise finished and so we decided to spend a bit of time in Southern Florida. This began with a huge mistake. We thought we would drive down from Fort Lauderdale to Miami Beach to see more of the art deco houses. What we did not know was that it was spring break. The area was seething with young people. It was impossible to park but the traffic was moving so slowly that I did get some photos out of the car window.

We gave up and headed south through a lot more traffic for our night’s stay in Florida City where we ended up eating a sandwich lunch at 4.30pm. Then it was time to catch up on a week’s backlog of e-mail, after no Internet on the cruise.

Sunday dawned bright, sunny and hot. We headed north and turned on to Tamiami Trail (guess how they made up the name) aka route 41, west along the edge of the Everglades. A stop at the Oasis Visitor Center had a convenient alligator viewing place where there were plenty of spectators, a few medium-sized gators and some fish that we didn’t recognize. The nearest we got to seeing the Florida panther was a stuffed one in the visitor centre. 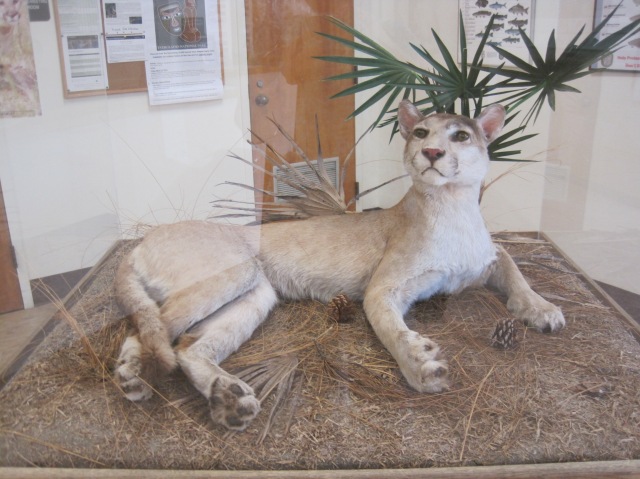 Our destination was Naples, the wealthiest part of Florida. There are some lovely buildings in the town centre and good restaurants where we had an extremely expensive Italian sandwich, sitting outside near a Porsche and a Bentley. We toyed with the idea of taking yet another trolley (open-sided bus on a truck chassis) tour and finally decided to do it. The heavens opened just as the trolley set off, but very fortunately only for 15 minutes. We had 2 hours of being driven around Naples, most of which was past one OTT mansion to another. The gardens were beautifully laid out and extremely well kept, but it did get rather monotonous after a while. Perhaps Americans are more interested than we are in where various famous people live.

Church in Naples, from trolley tour

A quick zoom up I-75 took us to the hotel in Fort Myers for our last 2 nights. We had a leisurely final day driving out to Pine Island where there are lots of colourful small wooden houses and no high rises. Our main destination there was the Randell Research Center, an archaeological site where the Calusa, once the most powerful people in Southern Florida, lived until the early 18th century when Spain ceded Florida to Great Britain and the last remaining Calusa moved to Cuba. Various sign boards around the side informed us about their lifestyle, but the most visible remains are shell mounds up to 30 feet high. An added treat was an osprey nest in the middle of the site. 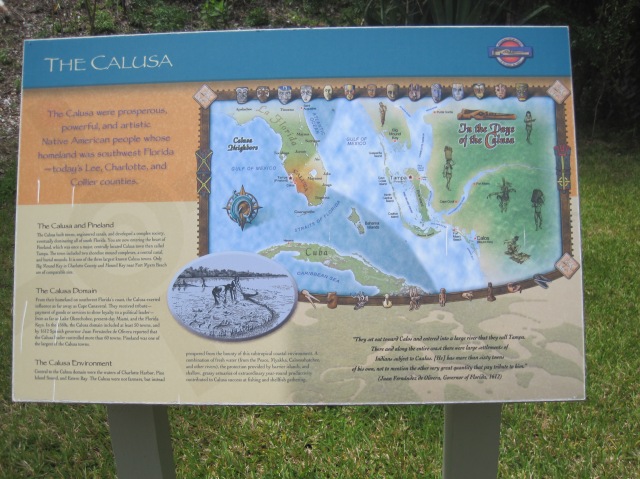 Elsewhere on Pine Island we watched some pelicans fishing in a rough sea and had our last ice cream – key lime of course.

A rough sea for pelican fishing off Pine Island

Our flight home from Tampa was on time, but characterized by an elderly plane and the worst food we have ever had on British Airways. Back to Lufthansa for next time, I think.

We were in Florida at the time of the Marjory Stoneman Douglas High School shooting. Needless to say it dominated the news for days and showed once again how polarized American views and media are about guns. One TV station talked endlessly about stricter gun controls, while another talked about mental health issues and giving guns to teachers. I watched the CNN “town hall” where in front of a large audience students and parents questioned the two Florida senators and the local congressman.

I was struck how articulate all the students were. Republican Senator Rubio, who has received over $1million in campaign funds from the National Rifle Association, did get some brownie points for turning up in contrast to the Governor of Florida Rick Scott who refused to attend. Rubio got a roasting from the students especially when he did not answer when challenged as to whether he would accept any more money from the NRA.

In the second part, the local sheriff chief did his best to calm nerves and let people know what law enforcement were doing, and a lady representing the NRA did her best to focus on mental health issues rather than gun ownership. Sadly, Trump’s latest antics were mostly dominating the news again when we left. It was good to see so many people turning out for the anti-gun marches on 24 March.

A pair of armadillos at Honeymoon Island

Inside the main chapel at Florida Southern College

Inside the main chapel at Florida Southern College

Inside Solomon’s Castle – where did he get this stuff from?

One of Solomon’s creations inside his castle

Stained glass at Solomon’s Castle, one of many

On the wall inside Solomon’s Castle

In the annex at Solomon’s Castle

In the annex at Solomon’s Castle

From the trolley tour in Naples

Church in Naples, from the trolley tour

Shell mound at the Calusa site

End of the Calusa

A rough sea for pelican fishing off Pine Island